The Missing Stats for Victor Lazlo 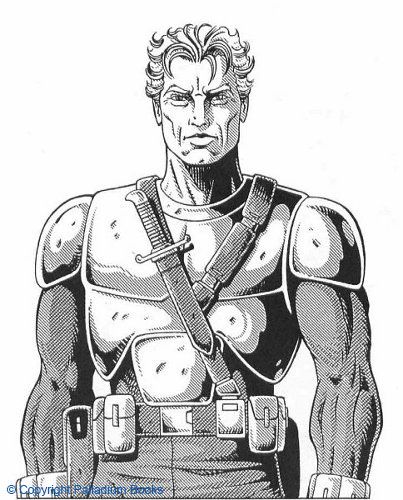 Psionic Powers: They have never manifested themselves enough to be considered "powers" that are available at will. Instead, they tend to automatically engage during periods of stress or danger, particularly sense magic, speed reading, mind block and impervious to cold (he rarely notices when they occur). Lazlo also gets "hunches" and the occasional dream warning, both are aspects of clairvoyance. The most overt and least often occurring psi-power is see the invisible. Victor also uses meditation to relax. I.S.P.: 123 points.

Magic Knowledge: Victor is not a practitioner of magic but does have a reasonable understanding about the fundamentals of how magic, spells, and ley lines work. He can read magic runes and symbols, recognizes magic wards and circles (86%) and can read scrolls and perform ritual magic as long as he has comprehensive notes or instructions (94%). His training also gives him some special abilities:

Combat abilities: Hand to hand: basic (11th level proficiency).
Combat/Attacks Per Melee Round: Four
Bonuses (includes all bonuses): +3 on initiative, +1 to strike, +4 to parry, +5 to dodge, +4 to roll with impact, +4 to pull punch, +2 to S.D.C. damage, critical strike on unmodified 19 or 20, kick attack (1D6 S.D.C.), and judo style body throw/flip (1D6 damage and victim loses initiative and one melee attack). +3 to save vs psionic attack, +3 to save vs horror factor, +2 to save vs magic and poison, +3 to save vs mind altering drugs and potions, +2 to save vs possession, and +8% to save vs coma/death.

Appearance: Human male who looks to be in his early forties, but is actually about 55 years old. He should be 63 but is the victim of space and time anomalies. He stands 5 ft, 11 inches (1.79 m), white hair.

Technology: As a man of science, Victor has always loved and used technology. He is fascinated by the advances of Rifts Earth and has adapted well to the use of high-tech computers, weapons and equipment.

Body Armor: Fully armed X-1000 Ulti-Max power armor with 309 M.D.C. left on the main body. He also has a Triax T-21 Terrain Hopper suit of power armor as a back-up suit. Can wear any type of armor and use most types of power armor at fifth level proficiency.

Money: He has accumulated a reasonable amount of money to continue his crusade to help D-Bees in the NGR underground. He has with him 1D6x10,000 credits and has approximately 500,000 credits back at his base in Germany.

Alliances & Allies: Victor Lazlo has a lot of friends and connections in and around the New German Republic, especially among D-bees, city rats, and subversive organizations. He is friends with Lo Fung (a chiang-ku dragon) and will become friends with Erin Tarn, Sir Thorpe, and possibly other heroes at the gathering.

Victor is a hunted criminal wanted by the NGR. If any Triax/NGR troops should be encountered, and they do have reconnaissance teams scattered throughout Europe and Africa, they are likely to recognize Victor or that the Ulti-Max is stolen (the serial number is that of a stolen vehicle and no NGR soldier would join forces with mercenaries or Lazlo). This can only mean trouble. They may confront the group and demand they turn the criminal over to them in chains. Failure to comply will cause the soldiers to take offensive action. If the group is too powerful, the soldiers may leave peacefully, but track them while they await reinforcements, and attack at the next opportunity. Or they may attack without warning and try to destroy Victor and/or the group. Characters who protect Lazlo are considered to be fools or dangerous subversives to be eliminated. Associating with dragons or other monsters will brand them as monster loving enemy troops. NGR soldiers will NOT join the group to fight the Four Horsemen of the Apocalypse, although they will report what's going on to their commander.